“SINISTERISM: SECULAR RELIGION OF THE LIE” by Bruce Walker

Bruce Walker has recently re-published “Sinisterism: The Secular Religion of the Lie,” and expanded it into two volumes (Outskirts Press, Denver, 2013, third edition).  The first volume contends the left-right ideological spectrum needs to be scrapped if people truly want to understand modern secular history. Walker demonstrates the left-right divide that pits Nazis on the far right against Communists on the far left, with varying degrees of Socialism and Capitalism in between, should be replaced with the honest admission that we often live in a mad, mad, mad, mad world – or what Walker brands as different branches of “Sinisterism.”  The second volume makes the case that much of this modern madness stands in direct opposition to the Judeo-Christian Worldview that secularity is at war with. 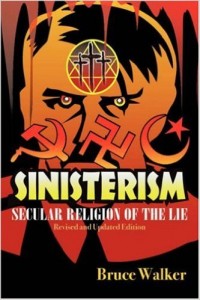 Walker simplifies the ideological political spectrum between Communists, Socialists, Nazis and Fascists as gang rivals of the so-called left. Walker then goes on to marshal a vast array of references from books written between the First and Second World Wars that validates how politically chaotic Europe was at the time.  Communists, Fascists, Nazis and Socialists were all at various time either friends or enemies, or both at the same time.  For example, Mussolini (1883-1945) originally was a Marxist, but later became a Fascist. However, he never disavowed socialism, and ultimately sided with Nazism.  Analyze that!

What Walker winds up establishing is that while Communists, Socialists, Fascists, and Nazis all prided themselves in some form of secular political collectivism, in reality, they were all very fractured in many ways which a strict understanding of ideology, rationally understood, can never explain. Quoting Dr. Zhivago, the political irrationality of it all is best captured by Boris Pasternak’s (1890-1960) biting commentary, “And so it was necessary to teach people not to think and make judgments, to compel them to see the non-existent, and to argue the opposite of what was obvious to everyone.” Surprisingly, Walker easily shows how hostile Italian, Austrian and French Fascists originally were with the Nazis up until the growing juggernaut of Germany finally took center stage in the later 1930’s.  As Mark Twain noted long ago, “Truth is stranger than fiction.”

Such political chaos can certainly explain how it was that Communism and National Socialism signed the Soviet-Nazi pact to initially carve up Poland, only to later involve themselves in the biggest war the world has ever seen. Walker even cynically shows how inconsistent and hypocritical Nazis sometimes were with regard to their own racial policies.  Communists may have self-righteously portrayed themselves as internationalists, but in practice, they were often nationalistic, racist, and Anti-Semitic.  More than a few writers of those times complained that both Hitler’s and Stalin’s empires were police states where totalitarian policies were far more important than the political ideologies they were supposed to represent.  Ideological hypocrisy was rife in both Communism and Nazism so that for all practical purposes, they dreadfully resembled each other all too closely.  Churchill said the difference between Communism and Nazism was like choosing between tweedle-dee and tweedle-dum, both of whom were violent and godless to the core.  In short, power always found a way to trump ideology.

The only weakness of Walker’s tactics that skillfully display the inherent contradictions of Communism, Socialism, Fascism, and Nazism is that it is perhaps not that difficult to show how people can act inconsistently with what they saw they believe – which is true of many Christians and Jews as well. Much of church history itself is riddled with embarrassing facts about the saints, and both the Old and New Testaments consistently display the heroes of the faith as they actually are – warts and all.  It is thus easier to argue that Communists, Fascists, and Nazis simply acted inconsistently with their ideological beliefs rather than suggest that naked power is the only real difference between them all.  Even thugs like Stalin, Mao and Hitler are still made in God’s image.  As such, they conjured up their own forms of self-righteousness to rationally justify their actions – no matter how self-deceptive it may have all been.

In fact, the Nazi desire for power was actually based on their “will to power” ideology which was mined from Nietzsche’s secular existentialism. Nietzsche (1844-1900) strongly believed that biological instinct and willpower based on earthly existential realities needed to replace what he considered to be an overemphasis upon western rationality wedded to the Judeo-Christian tradition that artificially separated man from nature. In the German existentialist worldview, the facticity of the earth and its existence trumped rational thought so that the concept of will was far more crucial than the intellect with regard to all behavior. Closely connected, Nietzsche himself wanted to stem the tide of what he believed to be an ever-increasing European cultural weakness which had borrowed too much from the meekness of Judeo-Christian morality.  What was needed was a morality based on biology and/or the “will to power” which could confront the nihilism of the modern age with courage and fortitude to set up a new world order based on strong superman values in direct opposition to the Judeo-Christian worldview. National Socialism also drank deeply from the evolutionary wells of Ernst Haeckel’s (1834-1919) Social Darwinism where biological determinism and hereditary impulses were the only moral guidelines to promote an allegedly ‘scientific’ view of racism where eugenic action coupled with state control could strengthen the nation and cure it from its growing degeneracy.

In other words, National Socialism’s drive for power was far more consistent with their ideological precepts than Walker gives them credit for. Their godless behavior can be perfectly explained by their ideology.  Such an ideological appreciation would have strengthened volume II where Walker masterfully describes how Bolsheviks, Fascists, Nazis, and others all had one common enemy – the Judeo-Christian worldview.  Walker even tactfully and graciously demonstrates the typical understanding of Christian anti-Semitism leading up to the Jewish holocaust is a myth that all Sinisterists want people to believe for their own power hungry purposes.  Walker strongly points out that it was the anti-Christian secular Bolsheviks and Nazis that led to the socialist slaughterhouse of the 20th century.  While modern secularists often complain about the atrocities of the Crusades, the Spanish Inquisition, and the Salem witch trials, they appear to be completely oblivious to the fact that Marxists, Socialists, Fascists and Nazis sacrificed more than 100 million people in the 1900’s – none of which led to the progress of mankind.

As the secular Sinisterists now appear to be joining hands with radical Islam these days, what kind of slaughterhouse awaits the 21st century remains to be seen as new generations of people will have to make their choice between Sinisterism and the Judeo-Christian Worldview.  Walker eloquently concludes, “Technology, the explosion of information, and the rapid advance of science does not make the prospect of Heaven on Earth better, but it does make the illusion of having Heaven and Earth within our grasp more seductive. Sinisterists wish every problem in our life to be one of social justice or mental health or education or poverty or self-esteem or some other catchphrase divorced from the morally divine.  The more we feel that we make Heaven ourselves, the more we will be seduced by the temptress of Sinisterism.”

Copyright 2013 by R. Mark Musser on the Canada Free Press.