AN ECO-FASCIST GASSING EXPERIMENT WITH DIESEL FUMES AT THE EPA

It has been recently revealed that the EPA has far surpassed the dark humor of blowing up kids and people on film that global warming scare mongers promoted a few years back.  In real life, the EPA has been conducting human experiments on people by piping diesel fumes from a running truck mixed with air into their lungs at a North Carolina university.  The agency has thus ginned up yet another green crusade – the lethal dangers of diesel fumes.  They even had a gas chamber set up to accommodate the environmental research project that shockingly recalls the death camps the Nazis set up in occupied Poland to exterminate the Jews. 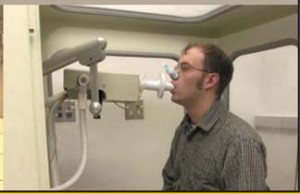 Not surprisingly, the EPA is now in the process of being sued for conducting inhumane experiments on human guinea pigs.  The courts will decide whether or not serious laws and practices were violated, including the international Nuremberg Code that was set up after 16 Nazi doctors were executed for medical terrorism.  After the barbaric fallout of Nazi Germany where many people were treated like experimental animals, the Nuremberg Code was designed to be an international governing set of principles to regulate the practice of human experimentation.  The whiff of the Jewish holocaust is therefore unmistakable.

When the Nazis found out how difficult it was in practice to shoot so many Jews on the Eastern Front at the outset of the war, they switched to gassing them at death camps with engine fumes.  Such gassing methods became notorious at Treblinka where almost one million Jews were killed.

In the early part of the war, the infamous commandant of Auschwitz, Rudolf Hoess, visited Treblinka.  Hoess testified at Nuremberg that the Treblinka motor room used tank and lorry engines to pipe diesel fumes into the gas chambers.  According to Hoess, it usually took about ½ hour before the gas chambers fell silent. Another ½ hour passed before the doors were opened.

Hoess commented that the engine fumes at Treblinka were not always entirely effective in killing the Jews.  While all the victims fell unconscious, many of them were still alive and had to be shot afterwards.  Adolf Eichmann told Hoess that they were experiencing the same problems in other death camps at the time too.  Auschwitz used Zyklon B which was far more effective.

The Nazis killed so many people they were forced to industrialize the process by making crematoriums that turned countless cadavers into ashes.  All of the ghastly work connected to this assembly line of death was performed by Jewish victims called Special Detachment Jews whom the Nazis specifically kept alive for this very purpose.  When the war effort started to go badly for Germany, the Special Detachment Jews were also required to unearth old bodies that had been buried and burn them up too.

When Hoess was forced to oversee such a grisly operation at Auschwitz, he would recover from such horrifying scenes by finding solace in nature, “If I was deeply affected by some incident, I found it impossible to go back to my home and my family.  I would mount my horse and ride, until I had chased the terrible picture away.  Often at night, I would walk through the stables and seek relief among my beloved animals.”

Hoess’s nature loving tendencies is far more revealing than most scholars would care to admit.  While Jews were treated like experimental animals and were burned up in sacrificial smoke in Auschwitz’s crematoriums, Hoess said his family lived a free and untrammeled life, “My wife’s garden was a paradise of flowers.”   Hoess was far more concerned about untreated stormwater discharging directly into the nearby Sola River from the camp than he was over the incredible slaughterhouse plans that the Nazi leaders were foisting upon him.  When Rudolf Hoess stood trial at Nuremberg, he concluded his testimony by saying he was not a sadistic man and that he never sanctioned the extermination of the Jews.  He was even proud of how much more humane the gassing process was at Auschwitz compared to Treblinka. The cunning of nature was indeed an escape route from moral responsibility.

Rudolf Hoess was SS.  The SS was the greenest faction of the Nazi Party.  It was run by Heinrich Himmler who was an animal lover, vegetarian, and organic farming enthusiast.  Himmler detested hunting.  In an instructional letter sent to Dachau Concentration Camp and Ester-wegen, Himmler stated “I wish the SS and the police also will be exemplary in the love of nature.  Within the course of a few years the property of the SS and the police must become paradises for animals and Nature.”    In many ways, the SS was Hitler’s ‘green’ praetorian guard.

The SS promoted an ideology called “blood and soil” where evolutionary biological racism, peasant agrarianism, and environmentalism were all fused together into a fascist whole.  Many leading SS men actually believed that German racial biology was being destroyed by the cosmopolitan life of the cities, that Germans were being uprooted from their homeland and enslaved to the artificial materialistic values of what they considered to be international Jewish capitalism and communism.    The Jews were vilified for their city ways.  They were also considered unnatural and outside the natural evolutionary laws of biological racism.  Many Nazis believed that such a violation of the ‘scientific’ laws of Nature had to be remedied. 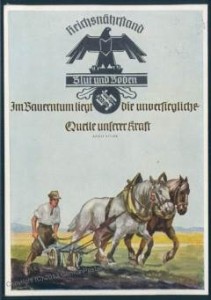 This flammable cocktail between German biology and environmentalism was at the heart of the holocaust at death camps like Treblinka.  When Jews were crammed into cattle cars on the way to Treblinka, the SS broke strict animal transport laws the Nazis themselves established.  While the SS side of Treblinka was a virtual garden camp, the Jewish side was a hell on earth.  While the SS were all involved in rehabilitating fox populations on their side of the camp, Jews were being exterminated on such a massive scale that the gravestones that still stand today at the Treblinka monument do not have individual names on them, only entire cities.  While the SS had beautiful picnic grounds that showcased a little zoo, the last sight that the Jews were given before they entered the gas chambers was the most exquisite flower garden in the entire camp.  After Treblinka was closed down, the Nazis planted lupine on top of what was left of the Jewish graves.  Lupines are wolf flowers.  Hitler called the SS his pack of wolves.

While no one died in the EPA’s gas chambers, the agency is increasingly acting like proverbial sheep in wolves’ clothing.   Under the guise of acting on behalf of everyone’s health, the EPA has crossed a pathological line where people have been potentially treated like experimental animals under questionable methods that conjure up the horrors of the holocaust.  More telling is the EPA subjected human beings to a concoction of diesel fumes that it already said was lethal.  If the EPA was truly concerned about human health, they would not have performed such experiments on more than 40 people in the first place.