DISPENSATIONALISM BEFORE DARBY by Bill Watson 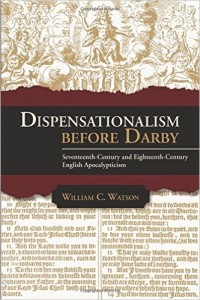 While the early church strongly held to a Pre-Millennial eschatology up until the time of Augustine (354-430), historical investigation into the archives of the Puritans  has now clearly demonstrated that Christian Zionism goes all the way back to the early days of the Protestant Reformation.  Pre-Trib researchers Dr. Thomas Ice and Dr. William Watson among others have revealed a growing and/or flowering Puritan Zionism throughout the 1600’s.  In other words, not only did many Puritans recover a much stronger interest in eschatology that had become lost in the Catholic Church, but they also came back with a much more pronounced Zionism – something lacking in the early ancient church in spite of its Pre-Millennial views. 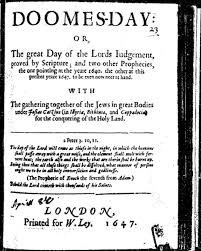 Swiss theologian and John Calvin’s (1509-1564) successor in Geneva, Theodore Beza (1519-1605) was perhaps the first significant Reformer to help unleash Protestant Zionism by saying “Israel” in the New Testament refers to the Jews rather than to Christians.    The historical/grammatical method of the interpretation of the Bible emphasized by the Protestant Reformers helped to begin the removal of the anti-apocalyptic emphasis of the Catholic Church.  Undergirded by its allegorical hermeneutics that downplayed the importance of Israel’s covenant history, Catholicism after Augstine buried Jewish eschatology under replacement theology that taught the New Testament church completely supplanted Old Testament Israel.  Through the publishing success of the Geneva Bible, Beza’s views on the future salvation of Israel became widely dispersed among the Puritans in England, Scotland, and New England.

Anglican Rector, preacher and evangelist of York, Edmund Bunny (1540-1619), looked forward to Israel’s future restoration to the land, and called on fellow Christians to love the Jews and minister to them with the gospel.  This is recorded in his Zionist essays, “The Scepter of Judah” and the “Coronation of David,” written in 1584 and 1588 respectively.

In 1608, theologian Thomas Draxe, who lived in England, wrote a commentary on Romans 11 called “The World’s Resurrection or the General Calling of the Jews.”  Draxe taught the Jews were still peculiarly God’s people by virtue of the fact that God gave them His everlasting covenant which could not be forfeited.  Draxe discouraged Christians not to revile the Jews because they are so indebted to them and their Old Testament heritage.  Draxe also reminded Christians that God will restore the Jews in the apocalypse.  In 1615, Draxe wrote the Jews would return to their own land and “continue gloriously on the earth for one generation, that…all the world may take full notice of their general calling” after the final destruction of the Ottoman Turkish empire at Armageddon.

Writing “The World’s Great Restoration, Calling of the Jews” in 1621, English lawyer Henry Finch predicted the Jews would physically return to the promised land of Israel and that this homecoming would be a sign of the impending apocalypse.  Along classic dispensational lines that sharply distinguishes Israel from the church, Finch argued against confusing the promises God made to Israel with those given to the Church.  He criticized those who said God’s promises have been transferred to the church as untrue “allegories.”  Finch presumed that God’s covenant given to Israel was eternal.

Finch also held that many apocalyptic prophecies in the Old Testament and the book of Revelation have yet to be fulfilled.  With interest, Finch wrote that Gog was Turkey, and that God would finally fight against the Turks when they fall in the land of Israel according to Ezekiel 38-39.  Finch also delved into the prophetic sections of Daniel and wrote that a revived Jewish state would one day cause consternation in the world.  Predictably, Finch was arrested, tried, and forced to acknowledge that King James was his only sovereign, not some future Jewish king!  After the trial, his book was burned. Such eschatological views, of course, were suppressed by both the government and the state church.

Two men who were heavily involved in the drafting and writing of the Westminster Confession, Thomas Goodwyn (1600-1680) and William Gouge (1575-1763), along with many others in the assembly, were Zionists.  Goodwyn was a Premillennialist.  He believed the last 10 chapters of Revelation described a future apocalypse, and he criticized those who allegorized the prophetic portions of the Scriptures.  Goodwyn was also Oliver Cromwell’s (1599-1658) chaplain.  Gouge himself was very close to what would be considered a dispensationalist today.  He was briefly put in jail in 1621 for publishing Finch’s “Calling of the Jews” in his own name.

In the 1640’s, English divine Robert Maton penned that the prophetic promises of the second coming of Christ were connected to the restoration of the Jews to their homeland.  Maton was a strong Pre-Millennialist who believed in a 1,000 year kingdom rule on the earth as predicted by Revelation 20 that will also be connected to the Jewish restoration back to their land in which apocalyptic forces would try to fight against them, only to be destroyed by the coming of Christ who will deliver His people Israel in the end.  Maton criticized allegorical interpretation of prophetic texts together with the preterists of his day who held that the prophecies of the Old Testament have already been largely fulfilled during the era of the New Testament.  In 1653, a Captain John Browne (1627-1677) , an American Baptist preacher, spoke of a mid-tribulation rapture of the church that will be followed by the restoration/salvation of the Jews.

American Puritan pastor Peter Bulkley (1583-1659) rejected preterist views on prophecy and strongly spoke of the future salvation of the Jews in a work entitled “The Gospel Covenant” written in 1646.  Incredibly, at a time when the Ottoman Turks were in control of the Middle East, Bulkley wrote the Jews would be restored to their homeland long before the second coming of Christ.  Such an understanding, of course, has since proven to be true.  Bulkley pointed out the great repentance of Zechariah 12:10 when the Jews will finally realize that Jesus is their Messiah, has not yet occurred, but will take place in the apocalypse.  He then backs this statement up with Romans 11 precisely because the Abrahamic Covenant given to Israel was eternal and unconditional as originally promised by God.  Undoubtedly, one of the reasons Bulkley moved to America was to have the freedom to teach his Zionist eschatological views.

In 1708, Increase Mather (1639-1723) sought to refute Richard Baxter’s (1615-1691) preterist view that the salvation of Israel already occurred during the New Testament era.  Mather quickly dispatched with such an idea by quoting John 1:11, one of the last books written in the New Testament which reads, “He came to His own, and those who were His own did not receive Him.”

Ironically enough, many American Puritans also rejected the notion that North America was slated to become the millenarian New Jerusalem of the world.  Many Puritans believed the Jews would return to the land in the last days that would eventually lead to the setting up of the kingdom of God on earth at the second coming of Christ.   According to Puritan expert Reiner Smolenski, some of the American Puritans even associated the apocalyptic theme of the woman running away into the wilderness to escape the pressures of the Antichrist (Revelation 12:6) to their very own colonial experience.  In other words, rather than set up the New Jerusalem in the new world, they wanted to run away into the wilderness of North America to escape the clutches of the Antichrist in Europe.  Yet, they still believed in the future restoration and salvation of Israel as predicted by both the Old and New Testaments.

Armed with such important historical research, Dispensationalists can now easily credit many Puritan divines as their rightful forefathers long before John Nelson Darby (1800-1882) systematized their views into a coherent systematic theology that became part and parcel of the Protestant Reformation.  Many belonging to the Reformed tradition who are skeptical of eschatology, have long tried to hang a Darbian albatross on the Dispensational movement as something too radical and unique in Christian history to be taken seriously.  Such theological criticism has now been severely undercut by the historical reality of a vibrant Puritan Zionism.  It is therefore far more accurate to acknowledge that eschatological views similar to Dispensationalism have been around since the early days of the Protestant Reformation, notwithstanding the fact that such views were often suppressed and hence, remained unpublished.