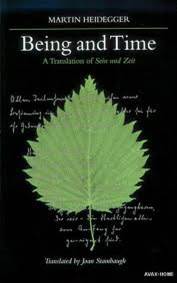 In his youth, second only to Arthur Schopenhauer (1788-1860), Adolf Hitler treasured the philosophy of Friedrich Nietzsche (1844-1900).  Both Schopenhauer and Nietzsche were early German forerunners of what could be easily characterized as a natural existentialism.  Both men argued that nature or existence is so permeated with the natural driving force of will that it essentially trumps all human thought and rationality.  Such a natural or existential outlook on the thinking man was a precursor to the Nazi “will to power” ideology.  This was perfectly showcased in Leni Riefenstahl’s (1902-2003) notorious documentary film “Triumph of the Will.” 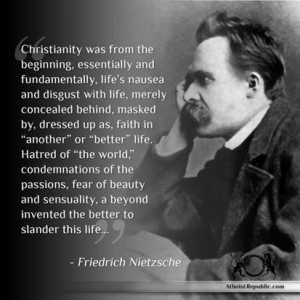 Hitler’s lifelong fascination with Nietzsche is corroborated by the fact that the Nazis essentially made the Nietzsche Archives of Weimar the official shrine of their regime in 1933.  Even as late as 1944, the green Nazi philosopher Martin Heidegger (1889-1976) went so far to say that Nietzsche was the spiritual inspiration of Hitler.

Nature and philosophical existentialism was used by Nietzsche to disguise his hatred for Christianity since the heavenly emphasis of the latter mocked the earth and its real flesh and blood existence.  The Nazis followed suit.  While Hitler seldom criticized Christianity publicly, he privately discussed his aversion toward the church before his henchmen.

On September 23rd, 1941, Hitler said, “to make death easier for people, the Church holds out to them the bait of a better world. We, for our part, confine ourselves to asking man to fashion his life worthily. For this, it is sufficient for him to conform to the laws of nature. Let’s seek inspiration in these principles, and in the long run we’ll triumph over religion.”  Such sentiments easily sum up in very simple language the entire philosophy of Nietzsche.

In his most personal work called “Thus Spake Zarathustra,” written from the spectacular Engadine Alps, Nietzsche’s hero, Zarathustra blurts out, “I beseech you my brothers, remain faithful to the earth, and do not believe those who speak to you of other worldly hopes!”   In fact, as far as Nietzsche was concerned, the Earth itself has replaced God.  One must now avoid sinning against the Earth rather than against God.  This is not far removed from Hitler’s own remarks in Mein Kampf, “when man attempts to rebel against the iron logic of Nature, he comes into struggle with the principles to which he himself owes his existence as a man.”

In “Thus Spake Zarathustra,” the earth and its existence is specifically used by Nietzsche to contrast it with heaven and its otherworldly emphasis.  Nietzsche’s infamous “God is dead” anti-theology is inextricably bound up with this earthly existentialism.  He was also convinced that the end product of 2,500 years of western philosophy has shown that there is no such thing as absolute truth.  As such, modern man must learn to live in a world filled with skepticism, relativism, and nihilism.

Nietzsche wanted to replace what he calls the Christian slave morality of weakness and meekness with strong masculine values like heroism, strength, and courage.  This is the heart of Nietzsche’s “beyond good and evil” doctrine.  Since the Christian God of meekness is now dead, men must become supermen in order to legislate a new set of values for the future based on biology and instinct rather than upon Christianity or western rationality.

Nietzsche believed the weakest part of man was his consciousness.  Biology, body and instinct were the strengths of man and must be promoted by the aristocratic supermen of the future.  Such an instinctual and physical emphasis also assumes that war and conflict will be at the vortex of human evolution.  Just as nature weeds out the weak from the strong in the predator/prey relationship, so too must humanity do the same through state prescribed breeding programs.

However, although Nietzsche was strongly influenced by Darwin’s (1809-1882)  evolutionary theory and the Social Darwinism of German scientist Ernst Haeckel (1834-1919), his eugenics was based on natural existentialism rather than upon biological scientism.  Nietzsche’s evolutionary thought stressed natural will rather than natural selection.

In Hitler’s lesser known second book called “Secret Book,” he wrote that though religious ascetics deny natural instinct, “the fact of his own existence is already a refutation of his protest. Nothing that is made of flesh and blood can escape the laws which determined its coming into being. As soon as the human mind believes itself to be superior to them, it destroys that real substance which is the bearer of the mind.”   Such an amazing quote from the Fuhrer strongly reflects the existential influence of Nietzsche.

In the mid 1930’s, Englishman Anthony Ludovici (1882-1971), an expert on Nietzsche and translator of many of his works, visited the Third Reich.  Ludovici wrote glowingly of his visit to Nazi Germany.  He gave his personal opinion on how much Nietzsche’s influential philosophy could be witnessed in the new Germany.  He even spoke of “Hitler’s sincere and earnest admiration of Nietzsche’s philosophy.”

Ludovici was most impressed with the Nazi “back to the land” movement.  The Nazis began setting up labor camps all over the Reich to help make Germany become more arable with a racist, local-only, green farmer policy.  Under the SS leadership of Heinrich Himmler (1900-1945) and Richard Walter Darre (1895-1953), the Nazis concocted a green racist collectivist program designed to re-ruralize Germany and thus root the economy into the soil of the homeland.  They believed this program would save Germany from the cultural degeneracy of the Jewified international city by developing a hearty and healthy people close to the land.

Ludovici said that the Nazis selected desirable people along strict biological lines to resettle the countryside.  He pointed out that the Labor Service slowed down the great migrations to the cities.  This was viewed very positively because he believed modern city life destroyed the natural biological health of the nation.  It also artificially uprooted people from the existential realities of nature, and made them dependent upon the political chaos of profit and labor created by the capitalists and the socialists.  Ludovici believed that urbanization, industrialism, religion and the anti-existential emphasis of western philosophy since Socrates (469-399 B.C.) was quickly leading Europe to biological ruin because of the impact of the Industrial Revolution.  Ludovici was thus very impressed with what the Nazis were doing.

While many scholars have been well aware of Nazi biological scientism, few (see Stephen Hicks Nietzsche and the Nazis) have bothered to connect National Socialism with existential philosophers like Schopenhauer and Nietzsche.  This oversight is due primarily to the fact that most scholars focus exclusively on the racism of the Nazis apart from the overarching historical context of other critical matters that were churning in the cultural background of Germany throughout the 1800’s and early 1900’s.  What many have either overlooked, or simply refused to accept, is that Nazi racism and eugenics was based on a philosophy of man and nature that borrowed just as much from the naturalism of the evolutionary sciences as it did from the natural existentialism of Schopenhauer and Nietzsche.  While there are certainly important nuances that can be stressed to separate men like Nietzsche and Schopenhauer from National Socialism, such distinctions are not enough to protect them from the charge of proto-Nazism.

Copyright November 2011 by R. Mark Musser on The American Thinker