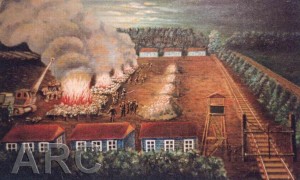 THE HOLOCAUST AS A GREEN NAZI SACRIFICE by R. Mark Musser

There is a luxuriant oak tree standing just inside the gated entrance of Auschwitz Camp I where the sign reads, “work makes you free.”  There are many stately oaks inside the camp and just outside the entrance.  Oak trees also existed in the immediate proximity of a few of the gas chambers and crematoriums as well.  The gas chamber doors at both Auschwitz and Treblinka were made of solid oak.  At Auschwitz, double oak doors were used to seal the sacrificial fate of all the victims.  That Adolf Eichmann (1906-1962) was placed in charge of the logistics of the holocaust is incredibly ironic.  His last name virtually means “man of the oaks.” 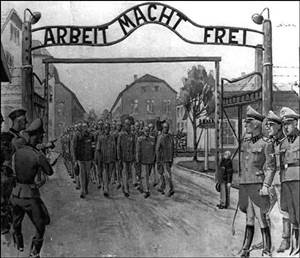 No matter how industrial the holocaust has so often been characterized, the ancient symbolism of human sacrifice being practiced under the oak trees bleeds through the veneer of Nazi modernism.  Eyewitness accounts depict conspicuous lightning rods that were attached to each of the four sides of the crematorium chimneys at Auschwitz.[i]  The massive flames that burst out from the chimneys accentuated the lightning rods, especially at night.  The Nazi SS letters themselves were iconically stylized after lightning bolts borrowed from nature mystic Guido von List (1848-1919).  List promoted a pan-German nature mysticism called Ariosophy.  Ariosophy simply means “wisdom of the Aryans.”  It was both anti-modern and anti-Semitic.  Ariosophy mixed apocalypticism, Norse mythology, paganism, racism, evolution, eugenics, and ecology into its worldview.  SS leader Heinrich Himmler was well aware the Norse god Thor was not only the god of thunder and lightning, but also the god of the oaks. 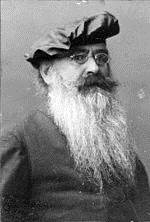 In his Social Darwinism, Hitler complained that Christianity itself was a “protest against nature,” and that “the Jew plays in nature the role of a catalyzing element.  A people that is rid of its Jews returns spontaneously to the natural order.”  Indeed, the weaknesses of the modern western world were presumed to have its crumbling foundations within the longstanding and anti-nature influences of Christianity, which, according to the Nazis, had made Judaism universal.  The ‘green’ sacrifice of the Jews would therefore be required to help Europe return back to Nature and her eugenic racial laws of evolutionary development that the Judeo-Christian worldview interrupted.  Judeo-Bolshevism would likewise have to be destroyed since many leading Nazis believed Soviet Communism was a secularized form of Christianity where a false political internationalism alien to Aryan values was run by Jews.

In his youth, while attending architectural school in Vienna in 1908, Hitler wrote a play about religious sacrifice under massive oaks centering on the differences between Christianity and German paganism witnessed by his roommate August Kubizek (1888-1956).  Kubizek recalled the setting of the play was “in the Bavarian mountains at the time of the bringing of Christianity to those parts. The men who lived on the mountain did not want to accept the new faith. On the contrary! They had bound themselves by oath to kill the Christian missionaries. On this was based the conflict of the drama.”[ii]  Hitler’s play was essentially borrowed from Guido von List’s Die Armanenschaft der Ario-Germanen published earlier in the same year[iii] as his ariosophical works had become cult classics in Vienna.

That Hitler would later rule Germany from the Bavarian Alps at his mountain chalet (Berghof) in the Obersalzberg fits in with the play that he wrote many years earlier.  Many of Hitler’s plans were envisaged at the Berghof where he spent much time brooding over the mountain landscape.  Could it be that paganism, mountains, oak trees, and human sacrifice are hiding behind the shadows of the firelight blazing around the camp of National Socialism during the holocaust?

Many of the actual leading perpetrators of the holocaust were Austrian Nazi mountain men from the Carinthian Alps.[iv]  It was they who administered Operation Reinhard (1941-43) from the Lublin district of Poland where perhaps more than two million Polish Jews perished in notorious death camps like Treblinka, Sobibor, Belzec, and Majdanek.  Shockingly, on the way down the green camouflaged fence corridors into the gas chambers of the death camps at Treblinka and Sobibor, the Jewish sacrificial victims walked under a sign in Hebrew that read, “This is the way to heaven.”  At Treblinka, after they passed under the sign, they were greeted with the prettiest flower garden of the entire camp.  These flowers were the last spectacle the Jewish people saw before entering the gas chambers to be ‘euthanized’ to death.

Even more sadistic, Treblinka Commandant Franz Stangl (1908-1971) referred to the gas chambers themselves as Jewish cities.[v]  The Nazis often characterized city areas populated by Jews as dirty ghettos, devoid of flowers, parks, and green areas, indicative of their alleged greed that strove to live above Nature by dominating it through finances.  Perhaps worst of all, lurid medical experiments were routinely conducted on humans in concentration and death camps while leading Nazis like Hitler, Himmler, and Goering fancied themselves as anti-vivisection animal rights crusaders.  Such notorious death camps also become colossal recycling centers.

After Treblinka was torn down by the SS, lupine wildflowers, which are wolf flowers, were planted on the remains of the Jewish victims[vi] where almost 750,000 people were sacrificed.  Hitler called the SS his “pack of wolves” and imagined himself as the very Uncle Wolf who would purge the German herd of the weak for the sake of its future eugenic health.  Ironically enough, SS General Odilo Globocnik (1904-1945), the very man who was in charge of Operation Reinhard, was originally from Wolf Mountain (Wolfsberg) in the Austrian Alps of Carinthia.  After the SS virtually liquidated Polish Jewry, the death camps of Belzec, Sobibor, and Treblinka were completely dismantled, cleaned up, re-afforested, and converted into farms by the fall of 1943 to provide green cover for its colossal crimes.[vii]

On November 3, 1943, some 43,000 Jews were gathered, shot and killed from various camps in Poland.  This concluded Operation Reinhard that had virtually exterminated Polish Jewry.   The SS called this final action, “Harvest Festival.”[viii]  While countless historians, commentators, and books have often emphasized the industrial nature of the holocaust, SS Nazis understood the concluding action of Operation Reinhard to be a special day on the farm comparable to an annual harvest celebration.  In the twisted Nazi mind, Jewish weeds had to be eradicated from the blood and soil of Germany’s lebensraum.  Operation “Harvest Festival” was the single largest Nazi Jewish massacre conducted throughout the entire war.