As of late, the most consistent violators of Godwin’s Law have come forth from environmentalists.  Michael Godwin, a contributing editor of the libertarian “Reason” magazine since 1994, coined a principle in 1990 that has become known as Godwin’s Law.  This law states that if a political discussion goes on for any length of time, particularly on the internet, it will invariably wind up in the dead end of a Nazi argument.  In other words, the Hitler card is thrown on the table like a veritable ace in the hole to stop the discussion since Nazism cannot be justified.  When such comparisons are made, this is almost always done very poorly because too many of these analogies are metaphorically applied to political situations that are remote from the actual history of National Socialism. 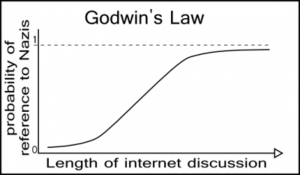 Over the last several years, many greens have been overly anxious to paint global warming skeptics as “deniers.”  Such language is holocaustal language, and it is cavalierly used to suggest that skepticism toward global warming and/or climate change is on a par with “right wing” extremists or anti-Semites or Neo-Nazis who deny the historicity of the holocaust.  Al Gore himself has often used the analogy, even going so far to suggest that a modern political war against human induced CO2 has to be conducted just as aggressively as World War II was waged against Nazi Germany.  Al Jazeera, who purchased Gore’s green television channel in order to branch out into American Cable TV, does regular reporting on global warming deniers even though they themselves have often been accused of anti-Semitism and holocaust denial themselves.  Such widespread usage has become so popular that even our current president’s political agenda website, Organizing for Action, has a special page devoted to calling out climate change ‘deniers’ from both the House and Senate in hopes of demonizing such politicians as unscientific dangerous extremists.

The bitter irony of such metaphorical green analogies that routinely breaks Godwin’s Law is these false comparisons are historically betrayed by the fact that National Socialism itself was the greenest regime on the face of the planet in 1935.  Even the father of deep ecology, Aldo Leopold, who later gave to America the madness of environmental existentialism by promoting the anti-intellectual concept, “think like a mountain,” visited the Third Reich the same year.  While critical of some of Germany’s long standing conservation policies over game management, overall, Leopold was complimentary of National Socialism’s commitment to green ideology and practices.  He noted the Germans were actually doing something about environmental problems rather than just talk about them like the Americans did.

Upon returning home to America, Leopold became obsessed with wilderness preservation precisely because he was shocked to discover Germany had none left.  Along the same lines, he also dragged home the “Never Cry Wolf” cult that is now plaguing many parts of western cattle ranges with the return of the big bad wolf.  Nazi Germany was actually the first country in the world to protect wolves.  While this was largely ceremonial since all the wolves had been already eradicated from Germany, Hitler himself loved wolves.  He liked to be called “Uncle Wolf” as a term of endearment, and his favorite tune he often whistled was, “Who is afraid of the big bad wolf?”

In 1933, the Nazis passed the most progressive animal rights law known at the time.  In 1934, they passed a green hunting law that was internationally praised in many circles.  That same year, the Nazis began a sustainable forestry initiative called Dauerwald, which means “eternal forest.” In 1935, the Nazis passed the Reich Nature Protection Act, which laid the groundwork for green social engineering schemes over private property and construction activities with many land use regulations, conservation advisors, and environmental effects reports.  Closely connected, the Nazis also began emphasizing environmental engineering, stormwater management, spatial planning theories, and sustainable development.

Throughout the 1930’s, Heinrich Himmler’s dreaded SS was trying to implement a radical “back to the land” movement to rejuvenate the blood and soil of Germany.  They did this by removing people out of the dirty cities allegedly run by Jewish international capital and then place them in camps across the countryside to work on farms so they could become hearty and healthy by getting closer to nature – all the while helping to serve the agricultural needs of the nation.  SS leaders like Heinrich Himmler and Walther Darre believed the “back to the land” movement would rejuvenate the biological health of the nation.

By 1940, this “back to the land” movement started to become mixed up with organic farming, but which had to be shelved in Germany proper because of the war effort.  Himmler, however, had plans to bring green farming ideas and practices to places like Poland, Ukraine, and Byelorussia once the eastern territories had been conquered.  More to the point, Nazi Germany’s environmental plans were to be extended throughout Poland, Ukraine, Byelorussia, and western Russia once the SS took firm control of their newly conquered lebensraum or living space by cleansing the landscape of unwanted and excess populations of Jews, Poles and Slavs.  Hitler once confided with Albert Speer, the Third Reich’s green architect, that Germany will eventually convert the eastern territories into “a flourishing park landscape of extraordinary beauty.”  Hitler and Himmler also had grandiose plans to re-afforest Ukraine and cover its landscape with windmills for the sake of renewable energy.

Incredibly, in April of 1930, Dr. Hans Frank, Hitler’s attorney who later became the Governor General of Poland, publicly attacked the Jews for their ritual kosher slaughter practices before a rabid animal rights convention in Munich.  After a medical expert spoke at the conference, Frank stood up and gave a tirade against the evil inhumanity of such Jewish practices upon which a resolution was adopted that stated, “The time will come for the salvation of animals from the perverse persecution of retarded sub-humans.”  Lest some think this has no bearing on the holocaust itself, Jewish kosher ritual slaughter is specifically targeted as the most heinous crime of the Jews being placed at the climax of the infamous Nazi documentary film “The Eternal Jew,” produced in 1940.

That same year, Frank also spoke of the liquidation of the Poles along environmental lines as well, “If I had to put up a poster for every seven Poles shot, the forests in Poland would not be sufficient to manufacture the paper.”  By 1943, Auschwitz had become a brutal euthanasia camp of incredible proportions where human medical experimentation replaced animal experimentation and all of the victims belongings, mostly Jewish, were not only stolen and confiscated, but recycled as well.

With such gleanings from the green Nazi historical record that barely scratches the surface, it is time for the modern greens to stop the madness of comparing climate skeptics to holocaust deniers.  Not only are such greens breaking Godwin’s Law, but they are placing themselves in an increasingly impossible position that their very own history itself flatly contradicts in a shocking turnabout that, if anything, proverbially places the shoe on their foot instead.

Permission is herewith given to copy and distribute by electronic or physical means as long as it is not sold – the copyright notice is included and credits are given to the author.  This article was originally published in April of 2014 on the American Thinker.